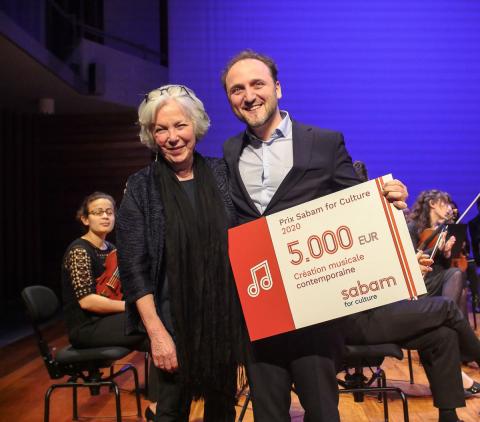 This Wednesday 4 March, as part of the 2nd edition of the Belgian Music Days (in Mons), the Sabam for Culture Prize - Contemporary Musical Creation - with a value of 5,000 euros - was awarded to Stéphane Orlando.

"Sabam not only manages the copyrights of talents active in all artistic disciplines and in the various musical genres. Thanks to Sabam for Culture, we support authors who excel in their profession. I am therefore very pleased to be able to distinguish, during the Belgian Music Days, the winner of the best contemporary music creation with the award of the Sabam for Culture prize," says Carine Libert, CEO of Sabam.

Motivation of the jury

Jury member Martine Dumont-Mergeay described it this way: "His creativity is so multifaceted and his career so atypical that Stéphane Orlando - 41 this year - was sometimes under the radar of the general public. But his former professors - and today his students -, his colleagues and the public at the Cinematek, where he has already accompanied more than 500 silent films, have always recognised in this free and learned artist, one of the most gifted musicians of his generation. »

Since 2019, he has shown unbridled creativity, as evidenced by The Museum of Silence and A Last Embrace, presented at the 2019 Loop Festival, as well as The Examination and Figuratine, two fake documentaries for which Orlando directs the music and which were broadcast during Sound Week 2019. Last November, Stéphane Orlando presented the opera Antigone in the Dark, which was particularly praised by the Sabam jury and which largely earned him his nomination for this award.

Composition of the jury

Bruno Letort, director of the Ars Musica festival and producer on France Musique