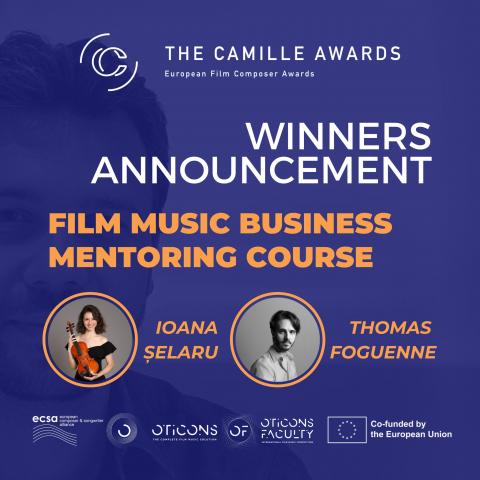 The European Composer & Songwriter Alliance (ECSA) and OTICONS are glad to announce the winners of the open call for the “FILM MUSIC BUSINESS Mentoring for European Film Composers”.

It was the second edition of this kind of open call. George Christopoulos, Founder and CEO of OTICONS, had to decide the winners among the 27 composers from 15 European countries that responded to the open call by listening to a selection of their compositions along with reading the bio that they shared in their applications.

After repeated and careful listening and contemplation, we are happy to announce that the winners of the Film Music Business Mentoring Award are composers: Ioana Șelaru (Romania) and Thomas Foguenne (Belgium).

“It took many listens and equally many reads of the CVs and the applicants websites, to conclude to this year’s winning composers. In other words, it was an extremely difficult task for me to distinguish not only who has pitched the most interesting compositions, but equally the most interesting bio; one that shows that they will indeed benefit the most at the moment from guidance and insights regarding the film music arena. Ioana’s natural talent and creative compositional mind was obvious in her contemporary music. And Thomas’ works combined command of chamber music and a pretty distinct voice, too. Both submissions sort of screamed of… unlocked potential. I do hope our sessions will unlock them and help them grow further!”

Congratulations once again to Ioana and Thomas!

We would also like to highlight the quality of the applications received, and to congratulate all the other participants.

ECSA and George have gotten in touch with Ioana and Thomas to arrange their customised mentoring sessions in the month of June 2022.